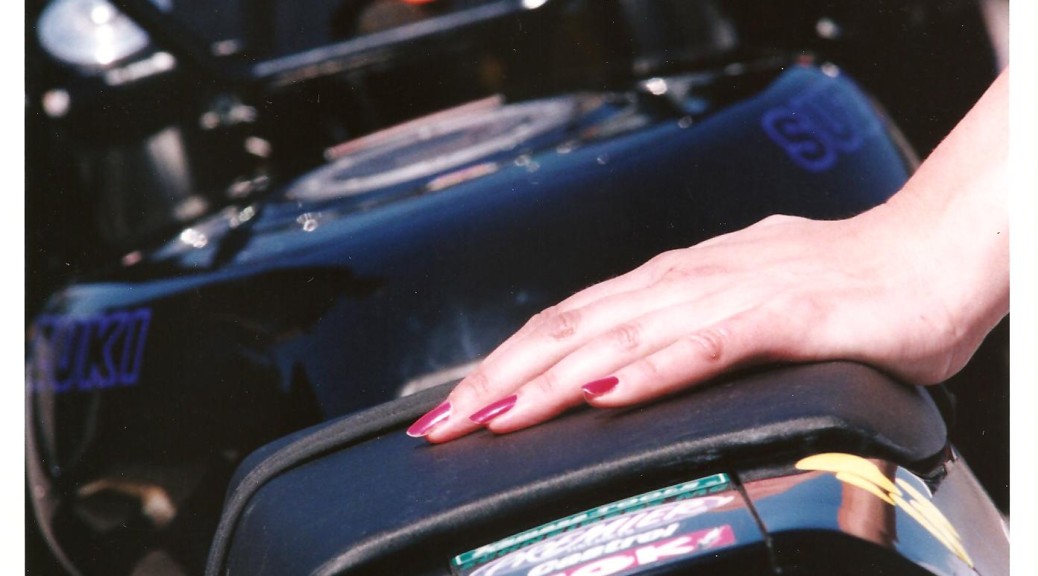 As the only female in a very male-dominated sport, the media loved me. The fact that I beat most of the guys made it that much more interesting I guess.

In 1990-93 I was in the media what felt like all the time. I was dubbed “Sweden’s Fastest Female (on Two Wheels)” and everyone wanted a piece of me — I was on talk-shows, news-shows, did interviews with radio and all major newspapers (which means about 2 radio channels and 3 papers in Sweden), as well as a couple specialty magazines and other publications. My USP (unique selling point) was apparently that I was blonde (Swedish, duh!), wore dresses and had long red nails.

I was invited to co-host a show called “The Guys in the Garage” — which was a great group of some famous bikers, motor-profiles, a comedian and a well-known mechanic and myself discussing motorcycles and riders. (I was looking at a video from that taping the other day — holy crap, my hair was huge!!!)

In 1994, EuroSport hired me to do live commenting for the Road Racing World Championship Moto GP. I soon learned that “Live” didn’t mean that we got to go to the GP races we were covering. Instead, it meant getting up at 2 am and trudge through sleet and rain to a tiny little studio in downtown Stockholm. There, we had to sit for 3-4 hours straight staring at two TV screens showing the race from some exotic country far, far away.

Besides the fact that it wasn’t as glamorous as I expected, I really sucked at being a commentator. I didn’t know much about the racers, the bikes or the locations and felt pretty silly for even being there. I had no idea why they wanted me for the job, but I started to realize that being a girl only gets you so far, being good at something takes dedication no matter who you are… So I quit that real fast. But not fast enough to not get some ridicule from my fellow racers. Oh well, I survived that too.