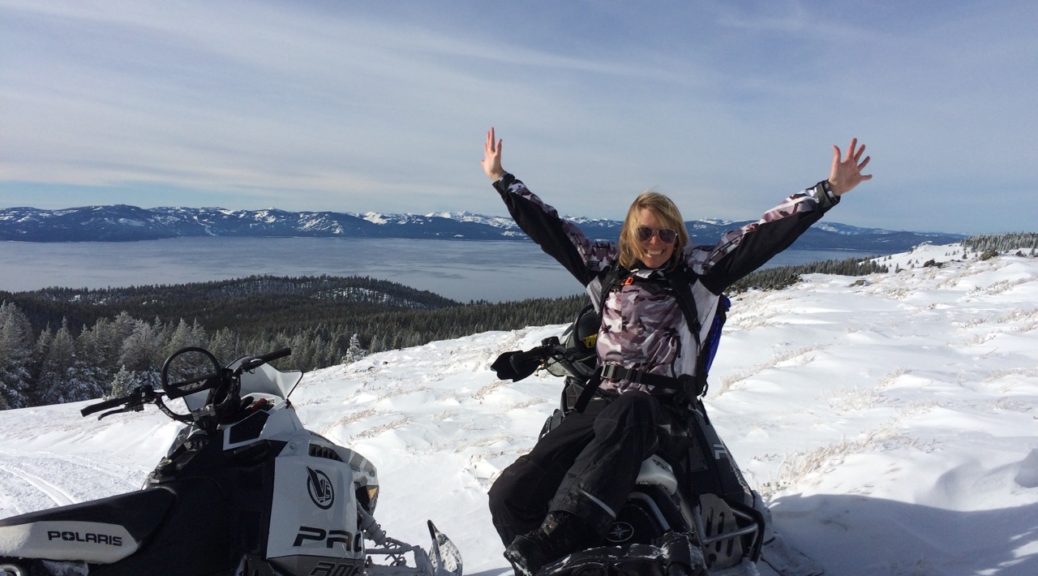 2016 is slowly coming to an end. This year has had a lot of action for all of us — myself, Lukas and John.

The beginning of the year had a little better snow coverage than previous years so we got some decent snowmobiling/snowbiking in. Motorized snow-play is pretty much all we care about in the winter…

When the snow melted, I kept heading up in the mountains but now on my horse Obi. It’s amazing to be able to enjoy the Sierras year round! John and I got some good trail rides in together and we both were like “Oh, I remember us riding through here in the snow! Looks soooo different!”

In June, Lukas and I moved back to our house in Tahoe. I had made a promise to Lukas that we would consider moving back in time for him going into highschool. So we did. Gotta play the “mom card” for a bit. There’s always time for me and John to do our stuff too 😉

Lukas started high school and is doing great. He’s almost as tall as I am now (which I think has been a huge motivator for him — he’s clearly growing now!) Lukas spent almost a month in Sweden with my family, which also included a week in Provence, France. Lucky kid! He also spent some time with his half sister and brother who both live in Sweden as well.

I too went to Sweden for about a week to do some serious shopping and visiting my family (not necessarily in that order). They’re doing great. My sister and her husband restored an old farmhouse that they live in full time now. It’s an incredibly beautiful location! My dad is being well taken care of by his lady-friend and I’m thankful I can stay with my brother and sister-in-law when I go to Sweden as it’s easy access to shopping. Their daughter Sara is adorable although I almost think she had about enough of Lukas after his visit. By the end of Lukas stay, the whole family had learned how to “Dab!” on commando from Lukas. Including myself.

John has been busy making sure life is exciting for all of us. In a good way. He’s been doing a lot of soul-searching and is spending a lot of time helping others through his own experiences. It may sound cryptic but you can ask him more about it if you want to know. It’s not my place to elaborate on his (our) journey.

John and his horse Harley is still holding down the fort at the Sandcastle. John loves that horse! I think he loves him more than he loves me — I’m afraid to ask… 😉 It’s a pretty healthy obsession though so “it’s all good” to use John’s most common mantra.

We love being back in Tahoe. I moved Obi with up here with tons of good riding in the Tahoe Basin. There are so many good trails straight out from the barn where he was boarded. Plus, it’s only 5 minutes from my house so I was over there at least twice a day and could ride whenever I wanted to. Will for sure keep Obi here next summer too!

We’re hoping for more snow before Christmas here in Tahoe. Yesterday, we did our first “real” snowmobiling outing. John was, of course, on his snowbike and I was on my sled. Lukas and his dad was out riding snowmobiles too and we all got together at the end of the day. Great day and many more of those to come!

When picking out photos for this Julbrev I realized we’ve done so much this year! I’ve put captions on the photos so you can see for yourself.

Last addition! Just found out that my bonus daughter Kaitlyn and her Jay got engaged the other day! That’s very exciting!

We wish you all a very GOD JUL and a GOTT NYTT ÅR!
Google it if you can’t figure out what that means.